FREE domestic shipping for eligible orders of 60.00 and above!
**Orders containing refrigerated items are shipped weekly on Mondays, Tuesdays and Wednesdays only.**
Due to pandemic related inconsistent transit times, ground shipping method may take longer in some isolated cases. We appreciate your patience and understanding as we continue to work hard ensuring the quickest delivery possible.
Skip to the end of the images gallery 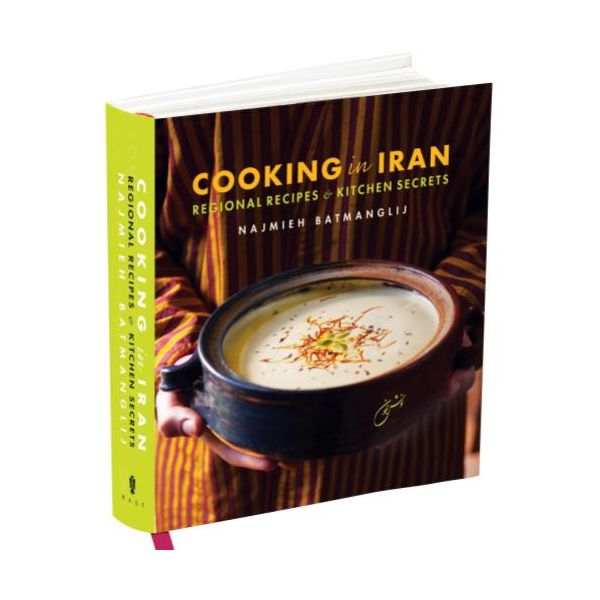 Skip to the beginning of the images gallery

Be the first to review this product
$69.99
A truly amazing production by Najmieh Batmanglij which is to bring joy, excitement , tears and admiration to any Iranian who reads it. "Starred Review" Batmanglij (Joon: Persian Cooking Made Simple), who grew up in Iran and has written extensively of the country’s cuisine, offers a massive and thorough guide to Persian cuisine. Batmanglij spent three years traversing the country, stopping in all of its regions, and in this collection of more than 250 recipes she shares an assortment of kebabs as well as osh, a traditional porridge-like soup made with butternut squash or carrot and bulgar. Highlights abound: Azerbaijani dumpling soup, featuring dumplings stuffed with ground meat in a spicy tomato broth; saffroned almond and pistachio baklava; walnut and sumac meatballs (made with lamb or turkey thigh); a savory mushroom pie, similar to the Russian pirozhki; and pistachio cake. Batmanglij fills the book with photos of vendors, farmers, and ancient ruins, and offers history lessons and bits of trivia (“The oldest archeological evidence of pistachios was found in Jarmo”). Stories of intimate family dinners shared on her journey and recipes she discovered talking with the locals—such as sweet and sour patties with chicken, mint, and turmeric, and almond paste with saffron (a friend’s mother would “spread the almonds on a clean sheet and cover them with pussy willow flowers”)—lend the feel of flipping through a scrapbook with a friend. This is a terrific, reverential, and accessible cookbook. (Nov.) Reviewed on: 10/01/2018
Availability: In stock
SKU
PBM-BK-562020
Facebook Twitter LinkedIn Google + Email
Details
Hardcover: 728 pages Publisher: Mage Publishers; 1 edition (November 2, 2018) Language: English ISBN-10: 193382395X ISBN-13: 978-1933823959 Product Dimensions: 8.7 x 2.3 x 9.8 inches Shipping Weight: 6 pounds Author's Biography Najmieh Batmanglij was born and raised in Iran. During her childhood, her mother wouldn't allow her in the kitchen. "Concentrate on your education," she would say. "There will be plenty of time for you to cook later in life." Najmieh came to America in the 1960s to study at university and would cook Persian food with fresh local produce using recipes sent by her mother in letters. Her housemates loved the food she made and encouraged her to cook all the more. Little did she know that the American food revolution had just begun. Later, when Najmieh returned to Iran with her master's degree in education in hand, her mother welcomed her into the kitchen and started to work with her. At the end of 1979, as the Iranian Revolution took a more fundamentalist turn, Najmieh and her husband fled to France, where their first son Zal was born. It was in France that Najmieh decided to follow her passion for cooking. With the help of her friends and neighbors, she wrote her first cookbook, Ma Cuisine d'Iran. In 1983 she and her husband emigrated to America, where she gave birth to their second son, Rostam, and wrote her first book in English, Food of Life. Najmieh has spent the past 35 years cooking, traveling, and adapting authentic Persian recipes to tastes and techniques in the West. She has been hailed as "the guru of Persian cuisine" by The Washington Post. Her Food of Life was called "the definitive book on Iranian cooking" by the Los Angeles Times. Her Silk Road Cooking was selected as one of the 10 best vegetarian cookbooks of 2004 by The New York Times; and her book From Persia to Napa: Wine at the Persian Table won the Gourmand Cookbook Award for the best wine history book of 2007. Najmieh is a member of Les Dames d'Escoffier and lives in Washington, DC, where she teaches Persian cooking, and consults with restaurants around the world.
Reviews
Write Your Own Review